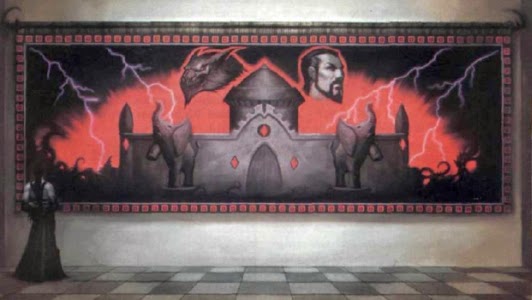 A flash report of what I did, what I experienced, etc. at Garycon VI.  The convention wore me out in many ways.

*GMed Lost City of the Elders three days.  No one liked flying items/spells, it seems, which really limited general movement/evasion, tactical advances, exploration and such in this dimensional city.  More on these in a later post.  Overall good fun had with some nip-n-tuck situations where one party was surrounded and surprised at once and fought a pitched battle until worn down physically by the waves of enemies!  Keyword concept overlays for the adventures:  Darkness, Terror, Pressure (atmospheric).

*Seminar on open form processes.  Went very well with some avid note-takers who were having difficulty keeping up due to the wealth of information.  Attended by Luke Gygax and my brother Terry, the latter who had some very pointed questions that only one with a design mind can pose.  In the followup Q's Luke got me OT by asking about Robilar's TOEE adventure which I turned to Gary's and my own sparring with jokes and puns over the years, and with a few laughs coming from those exchanges.  Lots of open ears and eyes in this seminar as I am upping the ante as I approach finishing the book related to same.  It included a handout from one of the chapters about linear vs. granular design.

*Had good talks with my brother Terry.  He was busy adjudicating several games at Gary's old house on 330 Center Street.  He's in the process of compiling some game material for publication, including a battle board game design.  We will be staying in touch.

*Attended the 330 Center Street breakfast and met with Yolanda, the current owner of the house, who is very gracious and has the patience of a saint in allowing it to be "invaded" for the convention by all sorts of oddities.

*Had prolonged and in depth conversations with David Wesely, David Megarry, Jon Hershberger, Dave LaForce, Paul Stormberg and many others.  The talks with the former 2 'Daves' were of specific interest due to their historicity, design path inquiries/exchanges and related.  Once a designer, always a designer.

*Paul Stormberg and I visited with Jeff Perren at a healthcare facility in Illinois, about 45 minutes from Lake Geneva.  He is in good spirits and humorous, as usual, after having sustained major surgery.  I will be visiting with him in the future as he is relatively close to my location, which I had not been previously aware of (in fact, there had been an errant rumor circulating that he had died!).

I'll post some pictures and some more convention details in between my writing, including a poem I am composing for my old friend of days gone by, Tramp.