Pieces I am Working For Into The Unknown

Breakthrough to the Bridge

Next Up on the ole Keyboard....

The Battle of St. Hubris

Take a prolonged look at my Greyhawk City Sewers and Catacombs map created for Gary's and my own shared campaign,  Greyhawk.  This is but a sample of the hundreds of maps on the El Raja Key Archive DVD available from TLB Games.


This map is representative of the time and detail both Gary and I contributed to our dungeon maps, to those crafted for Greyhawk Castle (my own Greyhawk Castle levels are also included on the disc), regional maps, city maps, and others.

The Archive is not only a tour of the history of RPGs from the Lake Geneva perspective, 1972 onward, it is a guide into the minds, habits and creative proclivities of those times.

Compare the above map to others made since then.  You just might conclude that Gary and I took our gaming and game designs very seriously!

Take the Tour of the El Raja Key Archive here:

https://www.tlbgames.com/collections/archive
Posted by Rob Kuntz at 1:16 PM No comments: 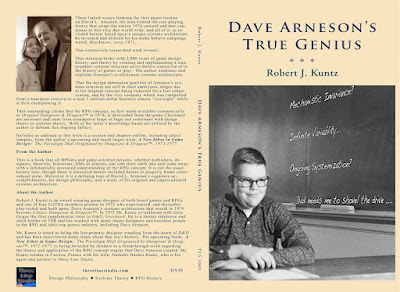 Robert J. Kuntz's seminal work, Dave Arneson's True Genius, is loaded with primary information on what a Role Playing Game is, and more importantly, exposes it for what it can be.

By dissecting Dave Arneson's design thinking the author brings to the RPG and Game Design Industries a minute study that has ramifications for the future of Conceptual Games while securing Arneson's legacy as the prime Architect of RPGs.

In it he atomizes from his day-one, hit the ground running, perspective Arneson's shift and how it forever changed current design tenants of the day that Gygax and himself had become used to. These standardized game philosophies were suddenly shredded and recast as a new whole upon these two LGTSA (Lake Geneva Tactical Studies Association) members being exposed, in 1972, to Arneson's new systems organization that he had invented for playing a "new game form."

Dave Arneson's True Genius consists of three interconnected essays that break down his historical leaps and describes their immediate and telling impacts.  They further detail, from a systems thinking perspective, the complex, open systems architecture he created as well as debunking the many outstanding myths of where RPGs are derived from.

Extensively footnoted and including many historical quotes by Gygax and Arneson that are put into their proper contextual time streams, DATG is a must for any RPG historian, the serious game designer, and for DMs who aspire to increase the application ranges of this unique concept. 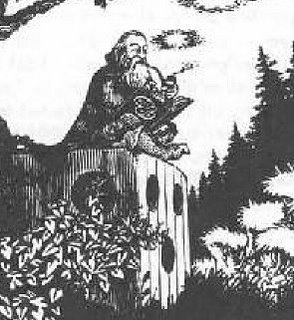 For those who have not ordered from TLS/TLB Games, we have a new address for subscribing for updates:

We have moved to direct mass e-mailings for product updates and releases.  Plus, less so, for other high end news.

May you never get caught in a dead end by an iron golem!