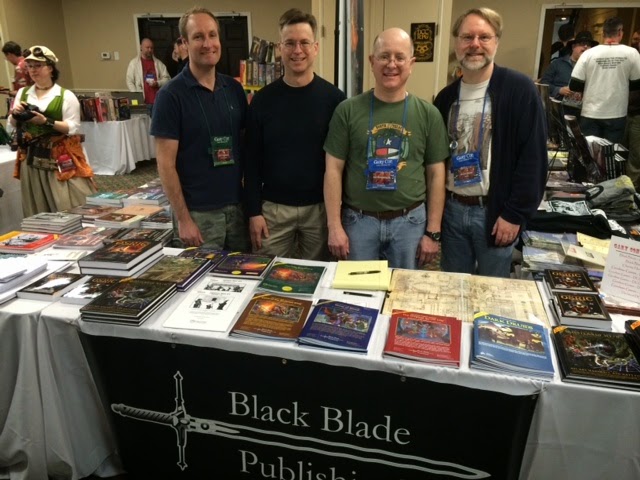 From Left to Right:

Guy Fullerton of Chaotic Henchmen.  CH President, Apple, INC employee, astute player and GM who has some great designs through his outfit as well as can explicate the whys and wherefores of good design in a heartbeat. I missed not being at Gary Con and hanging with his positive and insightful self.

Paul Stormberg of The Collector's Trove.  Is there anything Paul doesn't do besides run the grandest auctions of TSR and RPG artifacts available on the Internet?  Paul has organized and conducted 4 auctions of my collection and possessions, with another major one on the way.  He has also conducted in excess of 100 hours of interviews with me over several months, this many years ago.  The intention was to clarify TSR history in its various areas. He and his long-time buddy Martin Wright (R.I.P.), the latter whom I dedicated the Bottle City adventure to, scanned all of my major manuscripts and artifacts to CD, and it is he who I am partnering with to bring the CD Collection to collectors and the public.  Besides all of the above Paul organizes the Legends of Wargaming events at Gary Con every year.  This includes a replica of the old LGTSA's sand table for miniature games and many other events centered upon tried and tested games of the 60's-70's, with an emphasis on early TSR titles and/or their predecessors from Guidon Games, etc.  These events have been adjudicated by many ex-IFW, ex-LGTSA, ex-MMSA, and ex-TSR personages, such as:  Bill Hoyer (R.I.P.), John Bobek, Terry Kuntz, Michael Mornard, Mike Carr, David Wesely, Michael Reese, James Ward, Jeff Perren and others.

Jon Hershberger of Black Blade Publishing:  BB President and work horse, Jon seemingly has unlimited energy.  He has to date organized and edited many of my former works and he and I conference regularly on the state of our publishing agreement and the future directions being taken to expand it into many other areas, including LGTSA/TSR period RPG material, essays on the craft, related game fiction, and many other offerings that keep us both creatively engaged.  Jon has also championed the publication of my works for the DCC RPG as concurrent releases with BB's 1st Edition ones.

Allan Grohe of Black Blade Publishing:  BB Vice President and editor and a long-time friend.  Allan and I met at DRAGON CON #1 and started corresponding soon afterwards (yes, these were hand written letters where you checked your own spelling errors).  A Greyhawk fan (I say, "fiend") and a contributor to many projects far and wide, such as for White Wolf publishing, etc. Between Allan and Paul Stormberg they have sucked this designer dry of information about Greyhawk, TSR-related information and other odds and ends no doubt put to nefarious game use.  Allan helped me organize, edit and market the Bottle City project and was the one-time editor for the Lake Geneva Castle & Campaign line of products from Pied Piper Publishing before I closed down its operations.

And there you have capsules of four great amigos.  And for those women out there interested in any of them, they are all happily married with children (with Paul leading the pack with three girls and a boy).