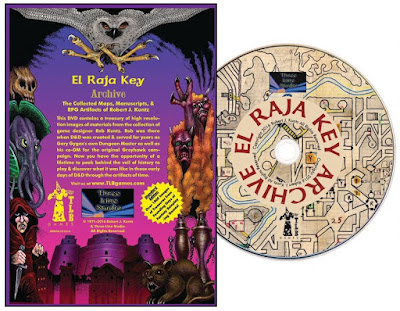 As many may be aware my wife, Nathalie, and myself have formed Three Line Studio.  The premiere product for this is due out in a week, The El Raja Key Archive and the accompanying release, the SUNKEN CITY adventure.   See former articles about these items in older posts, below.

The SUNKEN CITY is the first adventure release in a new brand for THREE LITTLE BOOKS™.  TLB is a partnership formed by myself with Paul Stormberg as distributor of the titles I design.

We have also been constructing the website for TLS to be ready for the launch.

Both products are finished, edited, and laid out.  I was informed by Paul and Kevin (Kevin Maurice is the programmer for the DVD interface) that they are testing the two versions of the DVD and making minor corrections to the index.  This from Paul the 13th of this month:

"I just finished proofing the DVD index yesterday and we are making corrections today. We made it so it could be used both as an index and a search tool.

"We had a really messy version of the index but thought with just a little more work could make it much more user-friendly and useful. We will be done with that today.

"The last thing we need to do then is to proof the entire DVD and all of its functions. We have some Beta-testers that will do the same with numerous different browsers and using multiple computer platforms. That will take us a full day to accomplish. The following day we will address all faults and restest them. Then we burn of master copies of the Basic and Standard and hand deliver them to the local duplicator.

"So far everything is working brilliantly and looks fantastic and professional but we must be certain we have a robust product before making 500 copies of it!

As well, the adventure is at the printer and we are attempting to time its printing in concert with the DVD's duplication services as the latter will take a few more days to produce than the adventure.

Both myself, Paul, Kevin and my wife, Nathalie, have invested thousands of hours and thousands of dollars in this multi-faceted project, so for those waiting and champing at the bit we are right there with you!