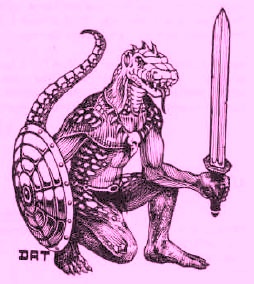 The Ssa is a nearly extinct race of serpent people that was almost eradicated during the time of the Great Devastation that laid low the Suul and their opponents.  Record of them cease after that time, though rumors persist to this day that they survived by relocating to one of three underground locations [detailed in the main text concerning them, following—RJK]. -- NS

Ssa ancient magic has over aeons become innate.  This allows them to wield each part as an intrinsic power.  Because of this their casting times are for the most part instantaneous.

Two 2nd level powers sampled from the 21 I am detailing for their mages and priests:

Scale of Ssura (Pr):  When invoked this causes the Ssa’s scale to shine a flaring red tinged by flecks of brilliant gold.  This has two effects:  1) It creates an eyestrain for attackers within a 10’ radius of the Ssa, causing them to misjudge his exact location and thus conferring a +2 to the latter’s AC (note that some spells, items or powers, i.e., true seeing, etc. would negate this effect); and 2) It deflects attacks that are less than magical +2 for up to ½ of its base hit points.  For example, if a Ssa’s base hp are 40 then it could deflect 20 hp of damage of less than +2 in origin. Thereafter this magical protection is negated and the Ssa can be damaged through normal means.  Range:  Self.  Duration:  1 turn/level of the Ssa; and/or until the deflection portion is negated through melee.

Imitate (Mg):  When invoked the Ssa immediately alters its form (c.f. polymorph self) to a form viewed within the last hour.  After that elapsed time these memory images lose their facility to be usable for imitation purposes.  Beings imitated must approximate the Ssa’s general physicality in most respects: they must be more or less bipedal and human/humanoid.  The Ssa must have viewed the being it will imitate for at least 1 turn and can be no more than 20’ from them in order to capture and retain a clear mental image.

Ssa favor imitating their racial enemies (q.v.).  It is considered a grievous social faux pas to imitate another Ssa without permission or a dire need to do so.  The indiscriminate use of this power in that regard has in the past been punished by banishment or death. Range:  Self.  Duration:  1 hour/level of the Ssa.

Image copyright Wizards of the Coast.
Posted by Rob Kuntz at 5:28 PM